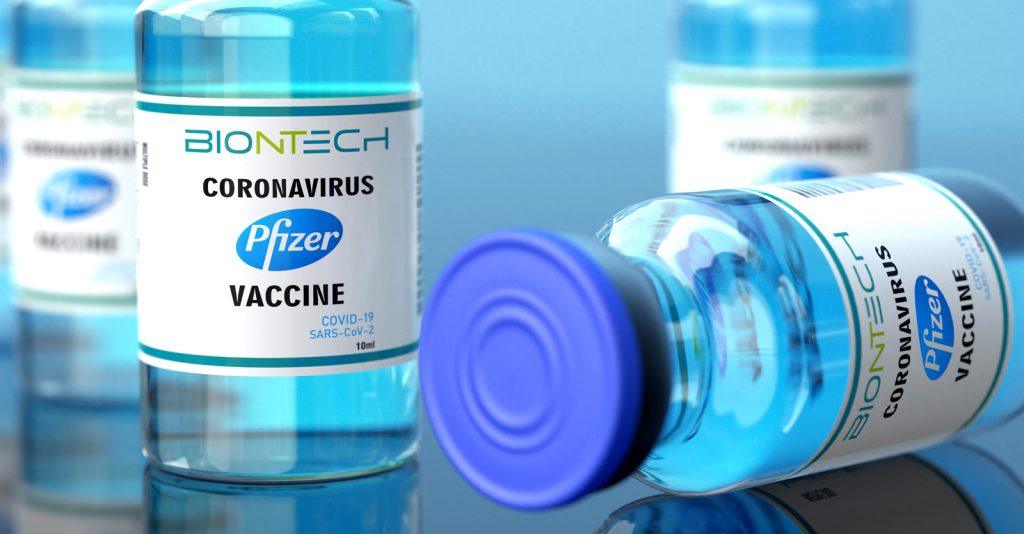 In August, CHD asked regulators to investigate the use of polyethylene glycol (PEG) in COVID mRNA vaccines, which could have caused the severe allergic reactions reported this week by two of the first UK recipients of Pfizer’s vaccine.

England’s National Health Service (NHS) warned Wednesday that people “with a history of a significant allergic reaction to a vaccine, medicine or food” should not be given the COVID-19 vaccine developed by U.S. pharmaceutical giant Pfizer and Germany’s BioNTech.

UK’s Medical and Health products Regulatory Agency, as reported by The Wall Street Journal, reminded health-care workers that vaccinations should only be carried out in facilities where resuscitation measures are available.

These warnings came after two National Health Service employees who were part of the first tranche to receive the vaccine on Tuesday suffered adverse reactions.

NHS England said in a statement that both of the medical workers who experienced anaphylactoid reactions to the Pfizer vaccine had a “strong past history of allergic reactions.”

According to these news reports, documents published by the two companies showed that people with a history of severe allergic reactions were excluded from the clinical trials.  Therefore, this life-threatening adverse safety signal did not appear in their clinical trial safety data.

Approximately 8% of the U.S. population has highly elevated levels of anti-PEG antibodies. The concerns we laid out in our letter about the Moderna vaccine were related to the fact that injecting a PEG-containing vaccine into individuals with pre-existing PEG antibodies could lead to life-threatening anaphylaxis.

Such was the case with a member of CHD, Harold Gielow, a retired military Lt. Col USMC who suffers with severe anaphylactic response to polyethylene glycol. In fact, the last time Gielow was exposed to an injected drug that contained PEG, he went pulseless, requiring an injection of epinephrine. His PEG allergy was diagnosed by Johns Hopkins.

Gielow has voiced outrage that PEG is classified by U.S. Food and Drug Administration (FDA) as biologically inert/inactive.

“It is anything but that,” Gielow said. “The incidences of hypersensitivity reactions to PEG are, understandably, increasing, although many with PEG hypersensitivity go undiagnosed, thus presenting an unreasonable hazard to administering these vaccines to a population, the vast majority of which is proven by science to have anti-PEG antibodies.”

In fact, investigators who once assumed that the polymer was largely “inert” are now questioning its biocompatibility and warning about PEGylated particles’ promotion of tumor growth and adverse immune responses that include “probably underdiagnosed” life-threatening anaphylaxis.

These undesirable responses have, on occasion, halted clinical trials. As a result, some scientists argue that it is time to develop alternatives to replace PEG. American and Dutch researchers declared in 2013:

“[T]he accumulating evidence documenting the detrimental effects of PEG on drug delivery make it imperative that scientists in this field break their dependence on PEGylation.”

On Dec. 2, we received a response from Dr. Hahn and Dr. Marks with a recommendation that we reach out directly to the mRNA vaccine manufacturers regarding our concerns with the use of PEG in their vaccines.

What is concerning about the response is the fact that in the letter we acknowledge that we had already reached out to Moderna’s scientists regarding the use of PEG and lack of informing vaccine trial recipients about the use of PEG in the vaccine, soliciting a history of PEG allergies and testing blood antibody levels to PEG.

Did the FDA officials actually read the letter?

CHD’s concerns about PEG stem from the fact that PEG-specific immune responses can actually reduce the efficacy of vaccines and increase the occurrence of adverse events.

A 2016 study in Analytical Chemistry reported detectable and sometimes high levels of anti-PEG antibodies (including first-line-of-defense IgM antibodies and later stage IgG antibodies) in approximately 72% of contemporary human samples and about 56% of historical specimens from the 1970s through the 1990s. Of the 72% with PEG IgG antibodies, 8% had anti-PEG IgG antibodies > 500ng/ml., which is considered extremely elevated. Extrapolated to the U.S. population of 330 million who may receive this vaccine, 16.6 million may have antibody levels associated with adverse effects.

The researchers confessed that the results were entirely unexpected. The authors concluded that:

“…sensitive detection and precise quantitation of anti-PEG Ab levels in a clinical setting will be essential to ensuring the safe use of PEGylated drugs in all target patient populations going forward.”

On July 28, Gielow wrote to CovPN citing the 2016 study’s conclusions and asked the following question:

“As Moderna’s mRNA-1273 candidate vaccine uses a PEGylated LNP vector, what procedures are included in the trial to mitigate this risk?”

The response from CovPN was as follows:

“Thank you so much for this scientific question. I consulted with several of the physician scientists working on the Moderna study, and they have provided me with this response to send on to you:

“Pre-existing antibody levels, along with various genetic polymorphisms, may impact the safety profile of a biomedical intervention in a variety of populations. If there are significant safety signals from the CoVPN clinical trials, all efforts will be made to understand the mechanisms that may have contributed to these signals. Pre-screening populations based on hypothesized biomarkers, such as anti-PEG antibodies, is not a strategy currently employed in our clinical trials.”

While the Moderna scientists allege that PEG antibody development is purely hypothetical, the scientific literature clearly documents that the immune system can and does form antibodies against PEG (anti-PEG Abs) in both animals and humans.

The existence of anti-PEG antibodies threatens patient safety through possible anaphylaxis reactions and re-exposure to PEG-containing drugs may greatly increase the chance for adverse effects due to B cell memory of anti-PEG Abs.

Thus, screening for and monitoring the levels of anti-PEG antibodies in blood before and during treatment with PEG-containing drugs are of particular importance to improve safety and maintain therapeutic efficacy.

If high-titer anti-PEG Abs are present in blood, even people without known allergies may have severe hypersensitivity reactions when receiving PEG-containing therapeutics for the first time.

Moderna documents and publications indicate that the company is well aware of safety risks associated with PEG and other aspects of its mRNA technology. In the corporate prospectus supporting Moderna’s stock market launch in late 2018, the company was frank that its technical approach has numerous risks.

Specifically, Moderna acknowledged the potential for its proprietary lipid nanoparticles and PEG to produce “systemic side effects,” given the scientific literature’s documentation of these types of side effects for other LNPs. In comments not generally seen by the public, Moderna stated (p. 33):

[T]here can be no assurance that our LNPs will not have undesired effects. Our LNPs could contribute, in whole or in part, to one or more of the following: immune reactions, infusion reactions, complement reactions, opsonization reactions, [links added] antibody reactions . . . or reactions to the PEG from some lipids or PEG otherwise associated with the LNP. Certain aspects of our investigational medicines may induce immune reactions from either the mRNA or the lipid as well as adverse reactions within liver pathways or degradation of the mRNA or the LNP, any of which could lead to significant adverse events in one or more of our clinical trials.

Instead of expressing concern over clinical trial participants’ welfare, that section of the prospectus concluded that any one of these problems “could materially harm [the company’s] business, financial conditions and prospects.”

As the excerpts from the Moderna prospectus illustrate, Moderna scientists are fully aware of PEG-related safety concerns. In the prospectus, Moderna admits that “unacceptable health risks or adverse side effects” could make it difficult to recruit or retain clinical trial participants and also that an “unfavorable benefit risk ratio could inhibit market acceptance” if their product proceeds to market.

Addressing the efficacy side of the equation, a mid-2019 study by authors who “are or have been employees of Moderna, Inc. and receive salary and stock options from Moderna, Inc.” further admitted that anti-PEG antibodies “present significant challenges to the clinical efficacy of PEGylated therapeutics and will require strategies to overcome [their] effects.”

In light of the recent acknowledgement of anaphylactic reactions to Pfizers’ PEG-containing COVID-19 vaccine, CHD continues to have grave safety and efficacy concerns about the use of PEG in vaccines due to the high percentage of the population having preexisting antibodies to PEG. While it’s unlikely that everyone with pre-existing PEG antibodies will have a severe reaction to a vaccine containing PEG, it is dangerous to assume that none will.

While vaccine manufacturers and federal agencies providing oversight on COVID vaccine development are quick to point out that the clinical trials did not identify safety concerns with the vaccine, they fail to mention the fact that the trial participants were excluded from the study if they had a history of severe allergic reactions and those in the trial were never screened for PEG antibodies.

Multiple previous studies regarding the prevalence of anti-PEG antibodies in the population have stated that pre-screening should be done prior to any administration of a PEG-containing medication. Screening  is likely to be even more important in the case of a vaccine intended for parenteral administration to as many people as possible that contains a substance to which the majority of the population unknowingly has antibodies.

Not characterizing trial participants’ adverse reactions in relation to anti-PEG antibody presence and levels eliminates insights into these interactions is a missed opportunity to prevent harmful adverse events.

Now we are left in a situation where life-threatening adverse events are occurring after widespread use of the vaccine has begun. A finger needs to be pointed squarely at the vaccine manufacturers and regulatory agencies who buried their heads in the sand to legitimate safety concerns in their rush to approve a COVID vaccine. Unfortunately, the public is now left to bear the burden of exposing these lapses in safety.

The views and opinions expressed in this article are those of the authors and do not necessarily reflect the views of Children’s Health Defense.

Lyn Redwood, RN, MSN – Lyn Redwood, R.N., M.S.N., is a Nurse Practitioner who became involved in autism research and advocacy when her son was diagnosed with autism. In 1999 she calculated the level of mercury exposure received from multiple thimerosal (mercury) containing vaccines and found her son was exposed to levels 125 times EPA Federal Safety guidelines and suffered with mercury toxicity. Since that time, Ms. Redwood has testified before the Government Reform Committee on “Mercury in medicine: Are we taking unnecessary risks?” and before a subcommittee on Human Rights and Wellness, “Truth revealed: New scientific discoveries regarding mercury in medicine and autism health in 2004.”