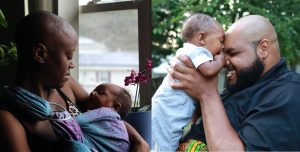 New Jersey couple Raymond Sykes and Kaila Boulware were traveling back to their home in New Jersey with their 9-month-old son after visiting Kaila’s father in Florida for the Thanksgiving holiday. Also in the vehicle were their two dogs, MANUELA and Rayla. Rayla is the 9-month old baby’s puppy. On the night of December 3rd, 2020, while driving through Troy, North Carolina at around 3 a.m., the family was stopped by two sheriff deputies. Reports from the sheriff department states they were pulled over because they were driving with “a white tail light” and it was “being driven in a manner, place and time that was suspicious.” When one of the officers stated that they were going to search the van, Raymond allegedly asked them “why?”, raising concerns about the legality of searching their vehicle without a warrant. That’s when the situation took a bad turn.