Millions of Americans will remember Wednesday as the first time in decades that the US Capitol building was successfully stormed and overrun – though, to be fair, when the British sacked Washington during the War of 1812, they didn’t stop to take selfies with the Capitol Police.

At any rate, the flashes of the chaotic crowd breaking windows and scuffling with police, accompanied by the news that 4 people died during the chaos (1 woman was shot by a Capitol Police officer, while 3 others died during unspecified “medical emergencies”, according to media reports) was enough to convince half the US that a low-key “coup attempt” had just taken place. Though the fact that lawmakers returned to the floor a few hours later to finish up the certification vote sort of undercuts that notion.

Citing Wednesday’s unrest as justification, GOP lawmakers largely dropped their objections and allowed the Electoral College tally to be certified, cementing his win.

And as several staff members reportedly threatened to quit in protest, President Trump published a statement via spokesman Dan Scavino promising an “orderly transition” on Jan. 20. While Bloomberg described the statement as a “concession”, Trump continued to insist that he still “totally disagrees” with the outcome of the election.

“Even though I totally disagree with the outcome of the election, and the facts bear me out, nevertheless there will be an orderly transition on January 20th,” Trump said. “I have always said we would continue our fight to ensure that only legal votes were counted. While this represents the end of the greatest first term in presidential history, it’s only the beginning of our fight to Make America Great Again!”

Matt Pottinger, a deputy natsec advisor and an avowed China hawk, is reportedly among the staffers who resigned in protest. Pottinger was recently in the news for going public with new, credible allegations that SARS-CoV-2 leaked from a Chinese lab.

Before the vote in the Senate, VP Pence spoke to promise that those who contributed to the chaos will be prosecuted. According to Capitol Police, some 52 people were arrested.

“To those who wreaked havoc in our capitol today, you did not win,” the vice president said. “Violence never wins. Freedom wins. And this is still the people’s House.”

Of the 52 arrests, 47 were related to violations of the 1800 curfew set by Mayor Muriel Bowser. 26 people were arrested on Capitol grounds. Several others were arrested for carrying firearms, either without a license or unlawfully.

In addition, the DC police chief said two pipe bombs were recovered from the headquarters of the RNC and DNC, while a cooler from a vehicle on US Capitol grounds that contained Molotov cocktails. 14 police officers were injured, 2 of whom remain hospitalized after being attacked by members of the crowd. Police said more arrests are expected as investigators will now attempt to identify people from camera footage. 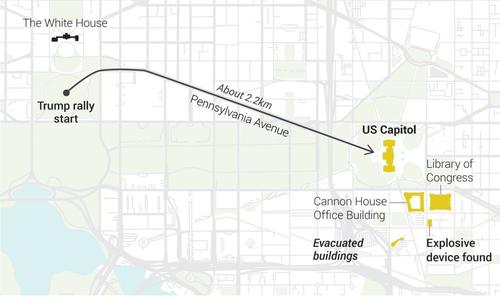 The vote in the Senate was completed early Thursday morning. One senator told reporters that she had backed away from the opposition vote because of the chaos.

“When I arrived in Washington this morning, I fully intended to object to the certification of the electoral votes,” Sen. Kelly Loeffler, who was supposed to take the lead on objecting to results from Georgia, said on the Senate floor Wednesday night. “However, the events that have transpired today have forced me to reconsider, and I cannot now in good conscience object to the certification of these electors.”

By the end of the proceedings, both the House and the Senate had rejected challenges to results in Arizona and Pennsylvania, while no senators signed on to challenges in Georgia and other states. 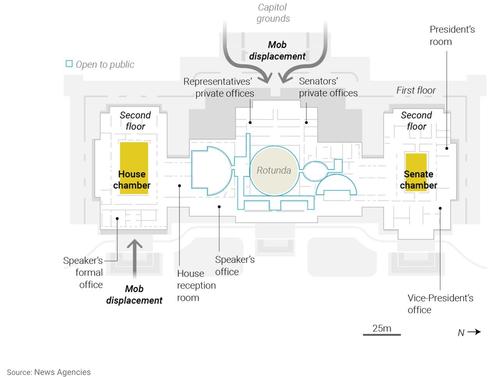 The FBI late Wednesday asked the public to submit tips, such as images, videos and other information to help agents identify people were “actively instigating violence.”

During what several media outlets described as a “siege”, at least one Trump supporter entered the Senate chamber, while others smashed windows in an attempt to break onto the House floor, where police officers brandished guns to keep them away. Police placed the building under lockdown, and lawmakers were instructed to prepare to put on gas masks as pepper spray filled the chamber.

Meanwhile, in keeping with the media narrative that Trump supporters aren’t proud Americans but crypto-fascists hoping to trample on democracy, Joe Biden – speaking from Delaware – said the Capitol’s storming bordered on “sedition” and called “on the mob to pull back and allow the work of the democracy to go forward.”

Though the chaos has subsided, Mayor Bowser’s public emergency declaration will remain in effect for 15 days, allowing her to impose restrictions on people’s movement.

The post It’s Over: Trump Promises “Orderly Transition” on Jan. 20 After Biden Win Certified appeared first on We Are Change.