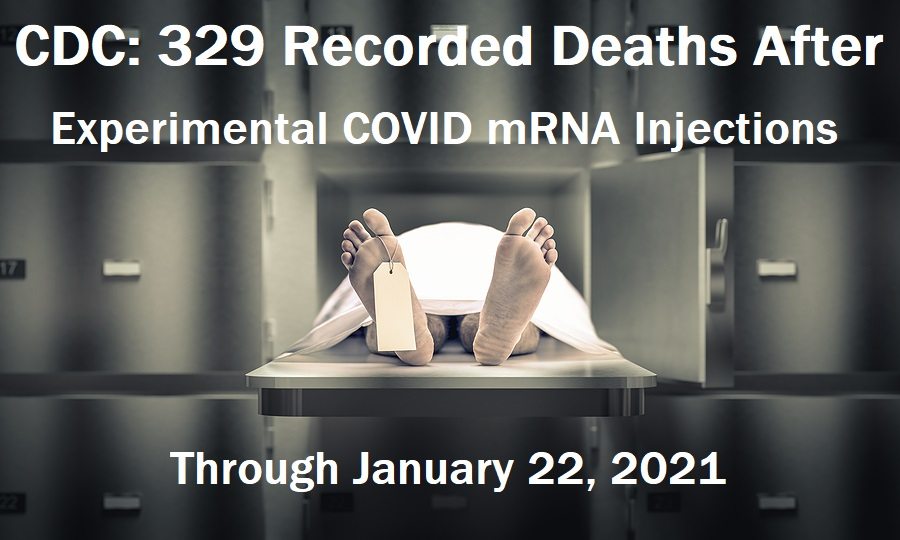 The CDC has done another data dump into the Vaccine Adverse Event Reporting System (VAERS), a U.S. Government funded database that tracks injuries and deaths caused by vaccines.

The data goes through January 22, 2021, with 9,845 recorded adverse events including 329 deaths following injections of the experimental COVID mRNA shots by Pfizer and Moderna.

On the January 15, 2021 data dump, there were 181 deaths following COVID mRNA injections through January 15th. See:

181 Dead in the U.S. During 2 Week Period From Experimental COVID Injections – How Long Will We Continue to Allow Mass Murder by Lethal Injection?

So 146 of the additional 148 deaths recorded during the past week were from the same time period from the end of December to January 15th – a period of roughly 2 weeks.

That’s an average of over 160 deaths a week, so far. How many more deaths will still be recorded during that time period?

As we have previously reported, studies in the past have shown that less than 1% of vaccine injuries are ever reported to the VAERS reporting system.

We are also dependent upon the CDC to supply these statistics.

Earlier this week, it was reported that the VAERS system was “temporarily down.” @AlexBerenson tweeted:

So @CDCgov says VAERS went down because it couldn’t handle the volume of requests it was getting (this was an email to an academic who asked).

“Starting (Monday) at 7:30 am, the server was overwhelmed by too many incoming queries… We are working to resolve this problem.”

So what percentage of all deaths do these 329 recorded represent is currently unknown. It is obviously very significantly higher than 329.

In addition to the 329 deaths out of 9,845 cases of COVID mRNA injuries filed, there were also 722 hospitalizations, over 2000 visits to emergency room doctors, 104 permanent disabilities, and 11 birth defects.

How is this not a national public health crisis? Since these injections are NOT FDA approved and are still experimental, why are they continuing to inject people?

It is well known now that due to federal funding for COVID in 2020 that nearly all deaths that occurred in 2020 were recorded as “COVID” deaths, even in cases where the death occurred by traffic accident, shooting, heart attack, etc.

So while there was a huge number of deaths recorded as being caused by COVID in 2020, nearly all other traditional causes of death, such as cancer, heart disease, etc. decreased, so that the total deaths in 2020 will end up being about the same as previous years.

Now we are seeing the exact opposite happen with the roll-out of the COVID experimental injections. NONE of them are being recorded as vaccine deaths. Why?

Our current system for capturing mortality rates can and does provide a mostly uninvestigated and inaccurate picture of what causes a death. The process for creating and registering causes of death for public records is a complicated, convoluted, politicized, completely open to both ignorance and the manipulations of personal, professional, and governmental interests.

I’m the one creating these statistics and I offer you this: If you take one thing away from this, take away a healthier skepticism about even the most accepted mainstream, nationally reported, CDC or other ‘scientific’ statistics.

What most people don’t know is that doctors are not allowed to attest to anything that is not a strictly NATURAL cause of death. (Full article.)

When you control the data, you can easily spin it to pretty much say whatever you want it to say, and the CDC is a master at this.

So while the new experimental COVID mRNA injections are rolled here at the beginning of 2021, the deaths that these injections are causing are almost all being recorded as “COVID deaths,” using the faulty COVID tests (all of these tests were also fast-tracked by the FDA to get them into the market, by the way) to justify their number.

Can We Trust the CDC and FDA to Give us Accurate Information?

I have published this information in several articles the past few weeks, but it bears repeating again as the CDC is currently in full propaganda mode trying to convince the public that all these deaths and injuries following the injections are “normal,” and “expected.” 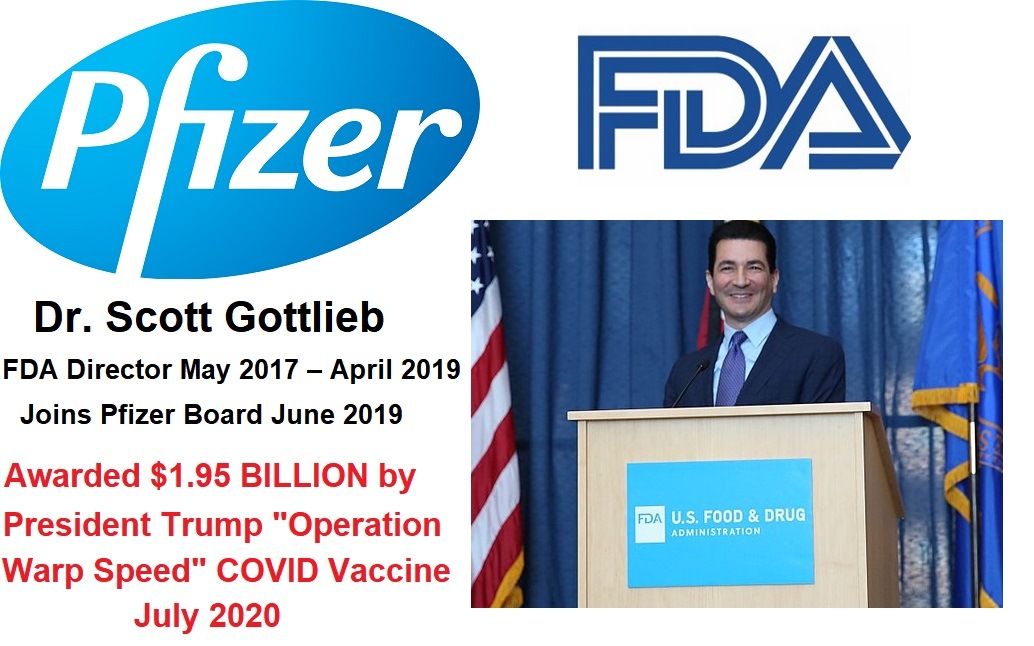 The CDC is the largest purchaser of vaccines in the world, allocating over $5 BILLION in their budget (supplied by American taxpayers) each year to purchase and distribute vaccines from Big Pharma. See:

Should the CDC Oversee Vaccine Safety When They Purchase Over $5 Billion of Vaccines from Big Pharma?

Do you think this might be a conflict of interest??

Secondly, the CDC owns over 56 patents on vaccines, and many of their scientists earn royalties from the sale of vaccines. (Source.)

Do you think this might be a conflict of interest?? 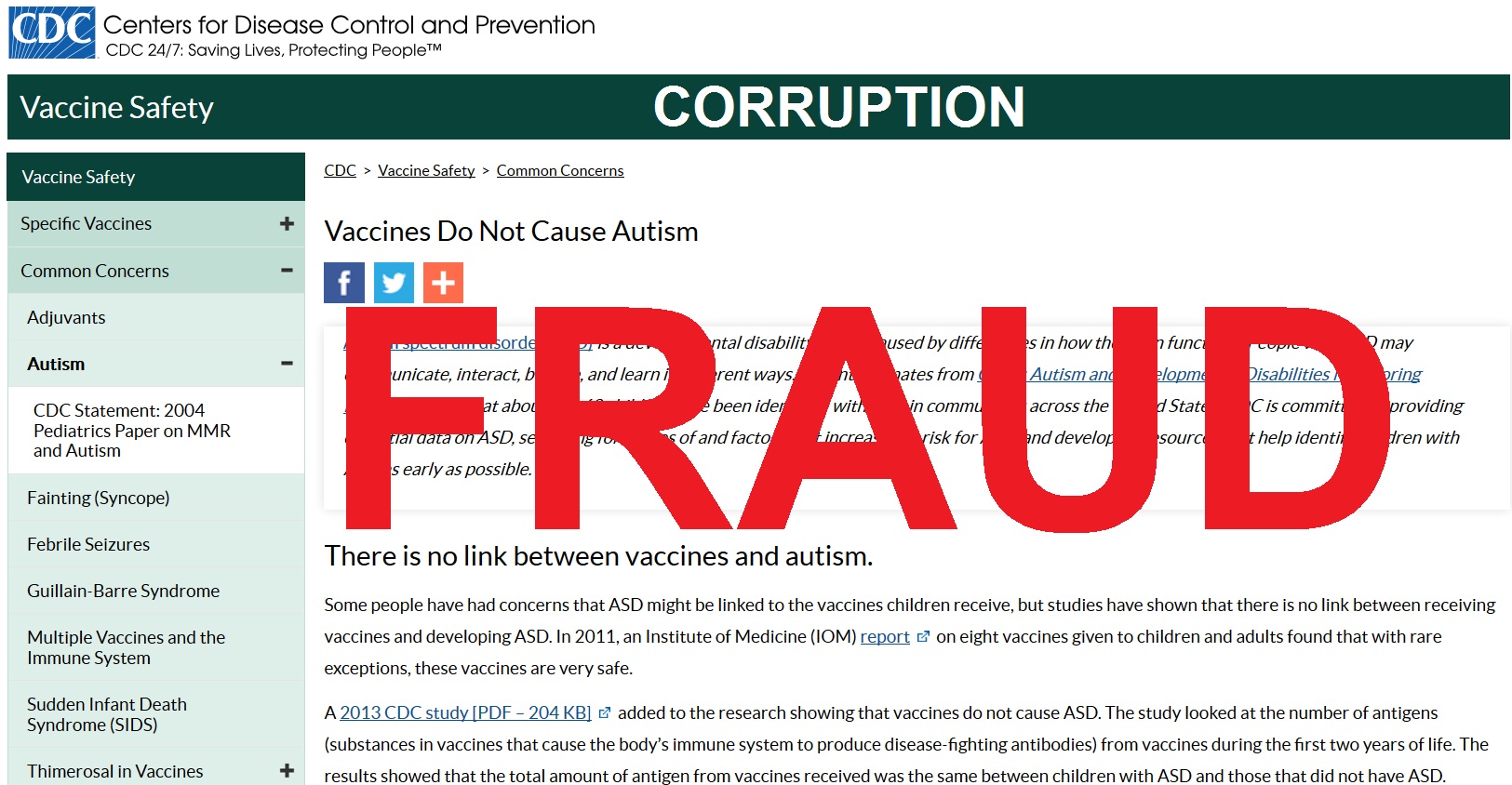 The CDC has a long history of corruption, and over the years many of their own scientists have tried to blow the whistle on this corruption only to be silenced. See some of our previous coverage on CDC corruption:

The CDC’s History of Research Fraud Regarding Vaccines and Autism

Can We Trust the CDC? British Medical Journal Reveals CDC Lies About Ties to Big Pharma

In addition, many of the directors running the CDC go on to work for Big Pharma after they complete their term at the CDC. See:

Dr. Scott Gottlieb was the former Food and Drug Administration (FDA) Commissioner. He joined the board of directors of Pfizer, Inc.—the world’s largest pharmaceutical company and second largest manufacturer of vaccines, in 2019 just shortly after he left the FDA. Pfizer, which posted total revenues of $53.7 billion in 2018, announced Dr. Gottlieb’s election to the board on June 27, 2019.

So what do you think? Can we trust the CDC and the FDA? Are they actually concerned about Public Health, or are they simply the marketing branches of Big Pharma trying to protect their products?

Please share this information that is being censored by Big Pharma’s corporate media by sharing the article: