Americans urgently rushed to their embassies to renounce their citizenship last year amid the virus pandemic, social unrest, economic crash, and political firestorms.

Even with consulates closed in the early part of the year because of the virus pandemic, renunciations still managed to nearly triple over the prior year. Before 2020, the highest year on record was 5,411 cases in 2016, ahead of former President Trump winning the 2016 presidential elections.

Americans Overseas estimates some 9 million Americans are living abroad. Every three months, the IRS publishes a log of who gave up their citizenship.

“This number possibly would have been higher if U.S. Embassies worldwide had not been closed for large parts of the year due to COVID-19 regulations. If this trend continues, 2021 renunciation numbers will be record-breaking,” said Americans Overseas.

Americans Overseas said, “stimulus checks of $1,200 + $600 are also being used towards the cost of renouncing” citizenship.

There has been a growing trend of U.S. citizens expatriating since the pandemic began. We first outlined this disturbing trend in August of last year.

The International Tax Blog posted annual expatriations from 1998 to 2020, showing the dramatic rise over the last decade. 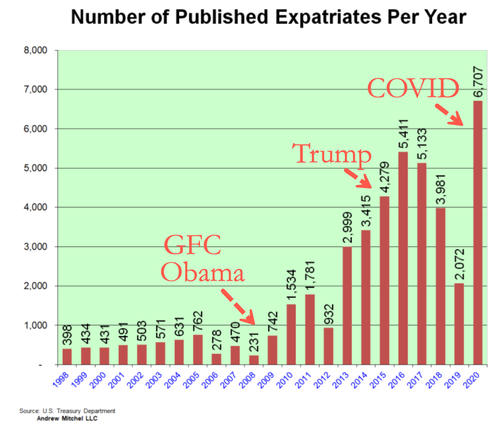 From 2010 to 2020, the quarterly expatriates show a more in-depth view of when the virus pandemic began that triggered an increase in expatriations. 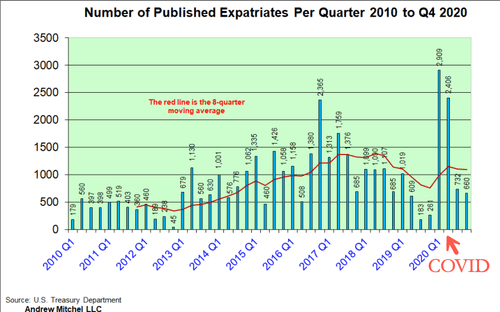 Once U.S. embassies open full-time, Americans Overseas expects the number of people renouncing their citizenship will continue to hit records.

The post Americans Ditch Citizenship in Record Numbers Amid Pandemic appeared first on We Are Change.