Less than a month away from the one-year anniversary of the pandemic’s official declaration, policy wonks at the Atlantic Council together with former and current government officials are dissecting the “lessons” of the Covid-19 epidemic to advise the Biden administration on the steps to take in order to avert the next disaster.

Following a report by the Atlantic Council’s “Forward Defense” program housed within the Scowcroft Center for Strategy and Security published in October, a panel comprised of the report’s author Franklin D. Kramer and others, including former Deputy Secretary of Homeland Security Jane Holl Lute and Jaclyn Levy, Director of the Infectious Diseases Society of America (IDSA), discussed Kramer’s “key findings” and how these should influence White House policy moving forward.

Right from the top, Atlantic Council Vice President and Director of the Scowcroft Center, Barry Pavel introduced the proceedings by establishing that the American “homeland” is “a theater increasingly under threat,” which is facing a broad “spectrum of non-kinetic risks to U.S. critical infrastructure and national security, such as cyberattacks, industrial espionage [and] potentially bioweapons.”

The last point squares with Bill Gates’ prediction that the most imminent threat to the U.S. will come in the form of a bioterrorist attack – a topic he most recently broached during an interview with “Veritasium” in early February. “Somebody who wants to cause damage could engineer a virus,” Gates warned, adding that “the cost, the chance of running into [such a virus] is more than just the naturally-caused epidemics like the current one.”

Gates has been spreading the idea of a bioterrorist attack since 2017 when he revealed to a group of Redditors that he was “concerned about biological tools that could be used by a bioterrorist.” He also told The Telegraph that same year that engineering a new strain of the flu would be “relatively easy.”

Despite buttressing his image as a supervillain in popular Internet culture, such warnings did not originate with Gates and have been fueling the rise of the biosecurity state in the U.S. since the late 1960s, when the father of bioterrorist plots Joshua Lederberg and his cohorts in government were sounding the alarm over Soviet bioweapons and imminent bioterror attacks that called for more robust policies, laws, and new federal agencies to deal with the purported threat.

Not out of nowhere

Those efforts yielded significant changes, culminating in the Blue Ribbon Study Panel on Biodefense, which produced the first comprehensive policy directive to address these questions on a legislative level through the National Blueprint for Biodefense in 2015 and the establishment of the Bipartisan Commission on Biodefense, co-chaired by former Homeland Security Secretary Tom Ridge and former Senator Joe Lieberman. 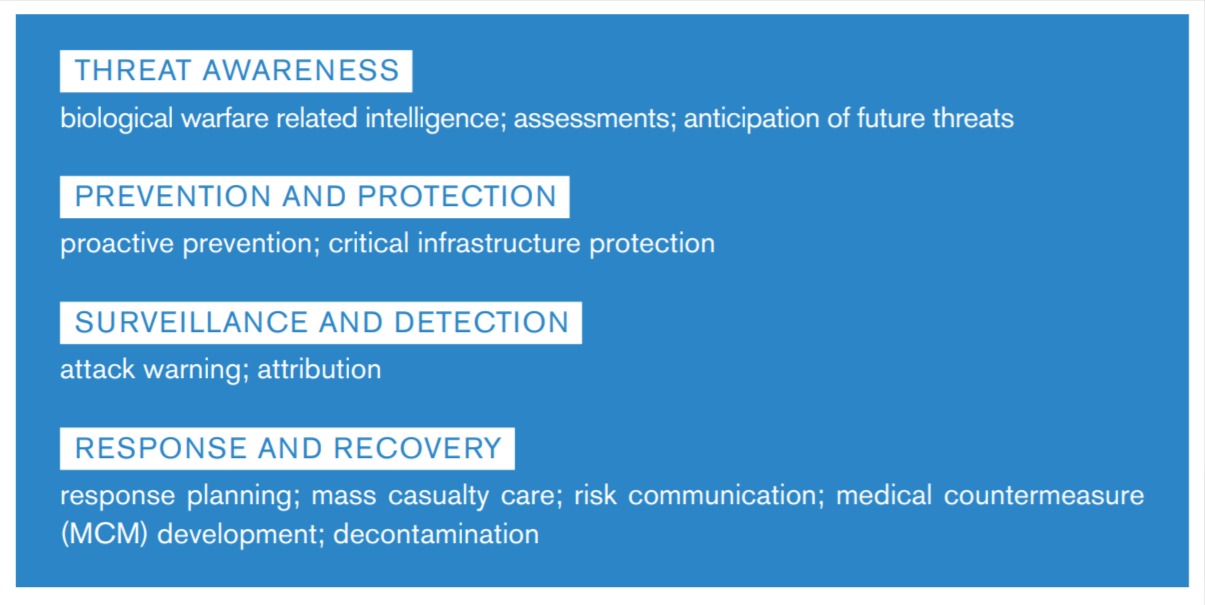 In September of last year, the Commission announced the creation of the Apollo Program for Biodefense. As its name suggests, the promoters of the biosecurity state want to liken their renewed zeal to space missions by tackling the challenges “with the same ambition and ingenuity that put the first human on the moon in 1969,” in the words of co-chair Ridge.

Just this past January, the Commission published the program’s first report, subtitled “Winning the Race Against Biological Threats,” which closely aligns with the thrust of the Atlantic Council’s approach to its policy recommendations for the Biden administration, and uses the COVID-19 pandemic as the jumping-off point to push for things like a “national pathogen surveillance and forecasting center” and the full implementation of the 2015 Study Panel’s recommendations.

Pavel, who is also the Director of the Atlantic Council’s Scowcroft Center for Strategy and Security, echoed the sentiment by exhorting Biden to adopt what the think tank is calling strategies of “resilience” to safeguard the “health, economic and security sectors” of the United States, warning that “if the U.S. is to avoid and mitigate major systems shocks like Covid-19 in the future, the President will need to prioritize and expand its focus on resilience in the early days of this administration.”

They’re all in it together

The Forward Defense panel discussion centered on the requirements for a national strategy based on the findings of the October report, which the author summarized in the following five points: First, to “undertake major research and development programs”; second, to “enhance public health”; third, to use artificial intelligence “to predict epidemiological trends”; fourth was the development of “a national pandemic plan and, finally “prepare US biodefense for bioterrorism threats.”

Jaclyn Levy from the IDSA referred to the progress made in these matters over the years, conceding that “the U.S. government [had] developed already prior to 2020 a number of pandemic preparedness programs and resources. But, operationalizing them during the pandemic proved to be a challenge.” She further expressed her belief that “federal coordination and federal support are absolutely critical to mounting a successful response [to biological threats],” and going as far as attributing the spread of Covid-19 to “the lack of a coordinated, centralized testing strategy funded by federal dollars.”

Levy was also keen on expanding the collection of genomic data from the population, extolling the efforts to advance “precision medicine” through public-private partnerships like the All of Us Research Program which set out to collect and sequence the genomes of one million people “stored in a biobank, which is housed by the Mayo Clinic,” as well as other “true sort of public-private partnership[s]” with Google and it’s parent company Alphabet, cautioning against turning away from such endeavors over potential privacy concerns.

Franklin Kramer followed that with his own stamp of approval, stating that “with the right incentive… we really can bring the private sector and the innovation capacities, both in the United States and with allies and partners to work on these issues,” proposing that institutions like Fauci’s NIAID approach Congress with a five or ten-year plan, similar to how the Pentagon does to procure funding for public-private partnerships in regards to these programs.

In 2008, the Bill & Melinda Gates Foundation donated the seed funding for the creation of the IDSA’s Center for Global Health Policy (CGHP), which bills itself as “a trusted leader in shaping and advancing international and national policies and investments in global HIV, TB, health security and antimicrobial resistance.”

Through the CGHP, IDSA is a regular “non-state” participant in World Health Organization executive board meetings and is a strong advocate for global immunization campaigns, which along with the vaccine development and surveillance, remains one of the top priorities of the Gates Foundation.

In a section titled “Lessons From The Pandemic— Underprioritizing Resilience” from his report, Kramer highlights the GAVI foundation – a Gates initiative – as an example of how the private sector was better prepared for a pandemic than most governments were, quoting from the organization’s own website describing it as “an elegant solution to encourage manufacturers to lower vaccine prices for the poorest countries in return for long-term, high-volume and predictable demand from those countries.”

It seems that as the COVID-19 pandemic approaches its first year anniversary, all of the previously scattered tactics and methods employed to deliver a true biosecurity state are consolidating. The only thing missing is the military defense component, which is the principal focus of the Scowcroft Center. Conveniently, Bill Gates’ bioterror prediction could put that final piece into place.

Republished from MintPressNews.com under Creative Commons

The post Atlantic Council Braces for Opportunities of Potential Bioterror Attack appeared first on We Are Change.