So… no power for hours with temperatures at 3F

Oncor asked people to prepare for the worse as the power grid experienced a systemwide failure due to historic winter conditions across the state.

Due to the severity of the electric generation shortfall, our expected outage length of 15 to 45 minutes has been significantly extended. Outages due to this electric emergency could last for hours & we ask you to be prepared.

In addition, we are responding to separate outages caused by the record-breaking winter storm that continues to impact our entire service territory. We are doing everything possible to respond to each of these power emergency events.

We remain in close coordination with ERCOT & we appreciate everyone’s patience as we do all we can to protect the integrity of the Texas grid.

As of 1110 ET, PowerOutage.US shows 2.7 million customers are without power. 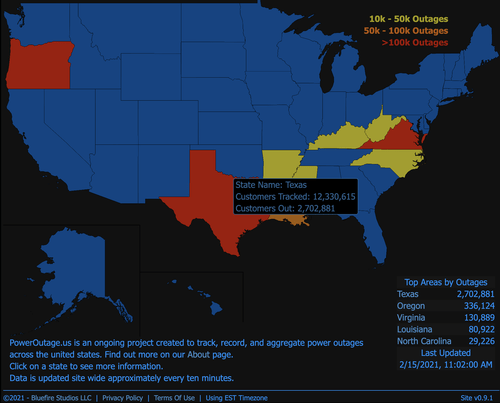 Texas’ grid failure could quickly morph into a public health crisis as millions freeze with temperatures near zero.

Rolling power outages are in effect across the state of Texas as the polar vortex split has poured some of the coldest air ever into the central US. There are nearly 2 million Texan customers without power as of Monday morning.

Texas power grid operator ERCOT warned Sunday of an “energy emergency” and threatened “rotating outages.” By Monday morning (0125 local time), ERCOT began “rotating outages” to “reduce demand on the electric system.” It continued: “Traffic lights and other infrastructure may be temporary without power.”

As of 0700 ET, PowerOutage.US shows 1.834 million customers are without power across the state amid frigid temperatures. 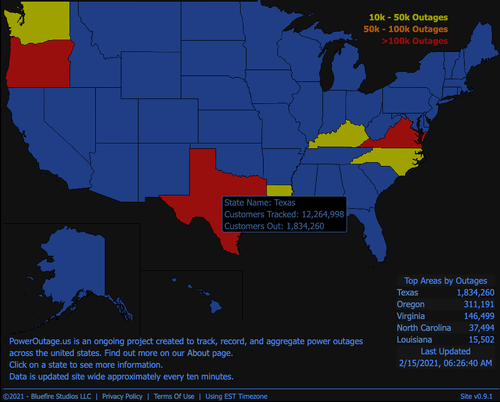 ERCOT officials said outages are expected to last between 15 and 45 minutes. They say blackouts are “necessary to maintain the system’s reliability.” Power demand is expected to remain at record levels through Tuesday as record-low temperatures will stay in the region through the week.

Temperatures across Texas and the central US are expected to be well below normal through the end of the week.

ERCOT’s decision to implement rolling power outages comes after we first warned of an imminent grid crisis on Thursday, when we reported that natgas prices across the plains states had soared to never before seen levels as a result of a brutal polar vortex blast. 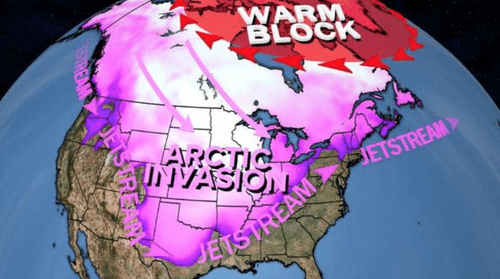 Over the last 24 hours, hundreds of daily records for cold temperatures were broken as Arctic air pushed all the way down to the Gulf of Mexico.

Over the past 24 hours we have absolutely obliterated daily record low temps across the Central US with a blast of #arctic air.

Just about every county in the Northern and Central Plains are under a Wind Chill Warning pic.twitter.com/rcR1NH9eXL

“We would expect to be in emergency operations tomorrow through at least Tuesday morning,” said Dan Woodfin, a senior director at ERCOT.

On Monday morning, ERCOT wholesale electricity prices for delivery surpassed the grid’s price cap of $9,000 per megawatt-hour, many multiples over the average costs of $25/MWh.

Our trader contact at a Houston energy firm sums the situation up as eloquently and succinctly as ever:

Natgas supplies have been “limited” to some power plants, Ercot said. Cold temperatures restricted gas flow from wells to pipelines, helping to spark a jump in spot prices from below $3 to more than $100 per million British thermal units.

“The President’s action authorizes the Department of Homeland Security, Federal Emergency Management Agency (FEMA), to coordinate all disaster relief efforts which have the purpose of alleviating the hardship and suffering caused by the emergency on the local population, and to provide appropriate assistance for required emergency measures, authorized under Title V of the Stafford Act, to save lives and to protect property and public health and safety, and to lessen or avert the threat of a catastrophe in all 254 Texas counties,” the statement from the White House said.

#ERCOT set a new winter peak demand record this evening, reaching 69,150 MW between 6 and 7 p.m. This is more than 3,200 MW higher than the previous winter peak set back in January 2018. Thanks to everyone who has been conserving today. We appreciate it! #conserve #saveenergy pic.twitter.com/eq56LLxcAS

If you are a retailer, obligated to, lets just say, 25MW, and did not hedge (meaning you left it to get filled by ERCOT at market clearing price), you just incurred a $7.1M cost on an around the clock basis for a single day.

The post Millions of Texans Freeze as “Grid Chaos” Sparks Massive Rolling Blackouts appeared first on We Are Change.