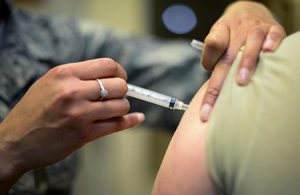 As of Monday, at least 59 people, mostly in their 70s and 80s, have died in South Korea following flu vaccination, up from 46 Saturday. That’s among more than 14.7 million people who have been inoculated this season.

Last year, more than 1,500 elderly people died within seven days of taking flu vaccines—deaths that were not linked to immunization, the government said, according to Reuters. Old people and young children in South Korea are eligible for free inoculations under a national scheme.