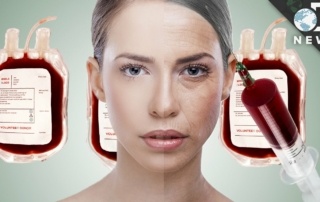 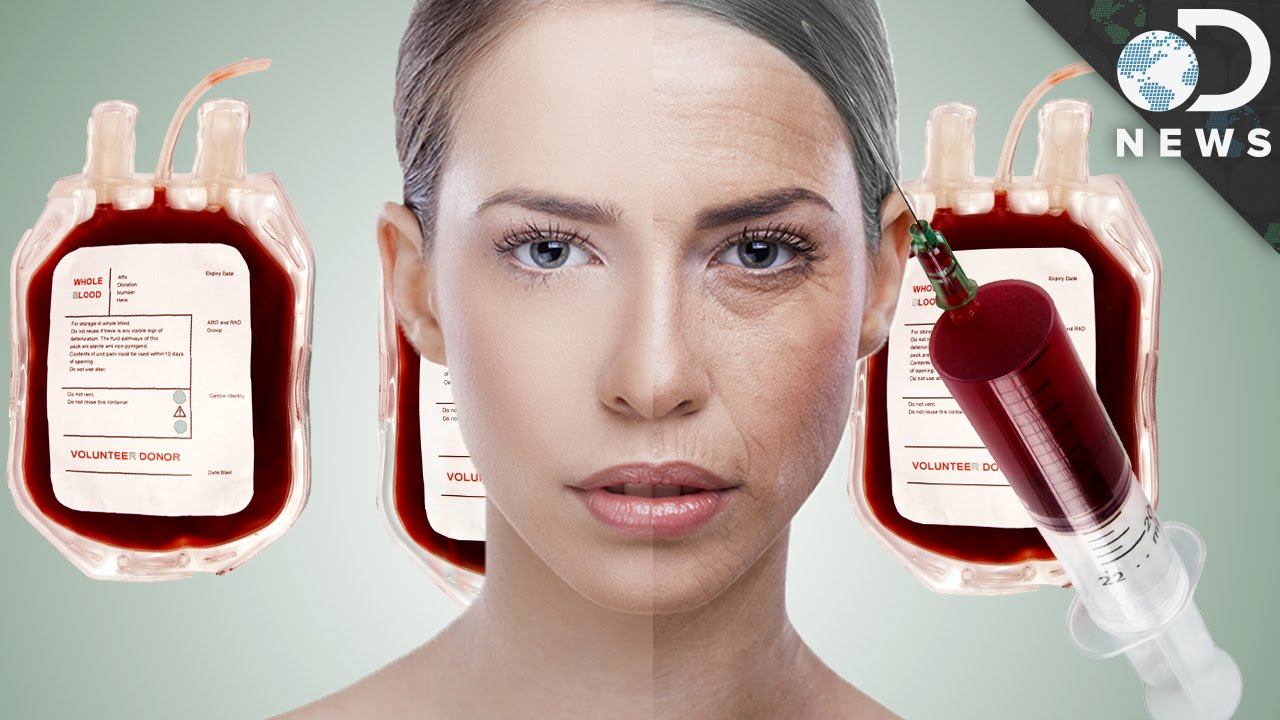 Last year, we brought to the attention of our readers the growing market for “young blood,” and products derived from the blood of children and young people, when Netflix launched their new show in August of 2020 called “Biohackers.”

From daily sessions in sub-zero cryo-chambers to stem cell injection and transfusions of teenagers’ BLOOD, their bizarre attempts to become superhuman have fuelled a multi-million dollar industry.

It may sound like something out of a sci-fi novel, but there’s a growing band of Silicon Valley billionaires who believe they can achieve eternal life through “biohacking” – the process of making alterations to your body to keep it younger.

Netflix’s new drama Biohackers, released on Thursday, (Aug 20) seizes on the terrifying trend by imagining a secretive lab where a young student, played by Luna Wedler, discovers a sinister experiment using the techniques on an entire town.

Here we meet the real Silicon Valley biohackers – the men who want to be immortal.

Paypal founder Peter Thiel has a gruesome plan to achieve eternal life – by injecting the blood of teenagers.

The practice, known as parabiosis, is not as impossible as it seems – in 2016, a start up firm called Ambrosia started offering transfusions of “young plasma” for £6,000 a time.

The billionaire mogul, 53, has said: “I’m looking into parabiosis stuff, which I think is really interesting. This is where they did the young blood into older mice and they found it had a massive rejuvenating effect.”

It’s not known whether Thiel has acted on his impulse but he has previously admitted to taking human growth hormone to slow his decline into old age, and he stands against the “ideology of the inevitability of death.” (Source.)

We also reported how the drug “adrenochrome,” harvested from terrorized young children who produce blasts of adrenalin, including children murdered in Satanic Ritual Abuse, was beginning to get mainstream media coverage outside the U.S. back in 2020. See:

While the corporate media in the U.S. would like to ignore and censor anything related to adrenochrome, “young blood” is a concept that they apparently want to bring mainstream and condition the public to accept.

So it was no surprise that Newsweek ran a major article on “young blood” last week, which was mainly positive and tried to present drug research into making products from “young blood” as “scientific” and inevitable.

Can Blood from Young People Slow Aging? Silicon Valley Has Bet Billions It Will

There is even an official “scientific” name for this research now: “geroscience.”

Geroscience “seeks to understand molecular and cellular mechanisms that make aging a major risk factor and driver of common chronic conditions and diseases of older adulthood,” according to the National Institutes of Health.

The admitted “problem” with developing these drugs derived from the blood of children and young adults, is where to get it.

The Newsweek article begins by highlighting a controversy at Brigham Young University last year where the going rate of blood donations doubled, supposedly because COVID-19 trials needed blood from those who might have antibodies.

The Spanish firm Grifols helped set off a kerfuffle last year when it, along with other firms, offered nearly double the going price for blood donations for a COVID-19 treatment trial. Brigham Young University in Idaho had to threaten some enterprising students with suspension to keep them from intentionally trying to contract COVID-19.

The trial failed, however, and now the Barcelona-based firm is hoping to extract something far more valuable from the plasma of young volunteers: a set of microscopic molecules that could reverse the process of aging itself.

Earlier this year, Grifols closed on a $146 million-deal to buy Alkahest, a company founded by Stanford University neuroscientist Tony Wyss-Coray, who, along with Saul Villeda, revealed in scientific papers published in 2011 and 2014 that the blood from young mice had seemingly miraculous restorative effects on the brains of elderly mice.

The discovery adds to a hot area of inquiry called geroscience that “seeks to understand molecular and cellular mechanisms that make aging a major risk factor and driver of common chronic conditions and diseases of older adulthood,” according to the National Institutes of Health.

As we mentioned in our article on “young blood” last year, Tony Wyss-Coray of Stanford University seems to be the main person who has published anything on the concept of “young blood” reversing aging, having conducted some experiments on mice, and you can listen to a TED Talk he did on it in 2015 when his studies had not yet been published.

Here is another video from 2015 discussing the same thing, and referencing an article published in The Smithsonian Magazine titled: Vampire Healing: Young Blood Can Mend Old Broken Bones.

The Newsweek story from last week shows that there is a lot of money being spent on this research now, and Big Pharma has already started some trials to try and get FDA approval.

In the last six years, Alkahest has identified more than 8,000 proteins in the blood that show potential promise as therapies. Its efforts and those of Grifols have resulted in at least six phase 2 trials completed or underway to treat a wide range of age-related diseases, including Alzheimer’s and Parkinson’s.

The result is a flood of investment money, an explosion of research into what precisely goes wrong in our bodies as we get old and the promise of clinical results down the road.

In the months before the pandemic, investors ponied up billions of dollars to fund biotechs aimed at commercializing the new science.

“You have no idea how many people are interested to investing money in longevity,” said Nir Barzilai, the founding director of the Institute for Aging Research at Albert Einstein College of Medicine of Yeshiva University, and the founder of a company aimed at mitochondrial health. “There are billions of dollars.”

Although the vast majority of these efforts remain in preclinical development, several have recently entered FDA trials and could potentially hit the market in a few years.

Some are already appearing on the gray market, raising concerns that hucksters are peddling anti-aging snake oil. Others, meanwhile, worry what might happen if these drugs actually do deliver on their promise: Will poor young people be coerced into selling their blood to elderly billionaires? Will magical anti-aging pills become the province of the Park Avenue and Hollywood rich, like facelifts, hair plugs and botox injections? Will the rest of us senile peasants be forced to watch them age backwards as we are left to wither and die?

Read the full article at Newsweek.com.

And while Newsweek does address these “concerns” by presenting them as questions, this is obviously a pro-pharma piece designed to plant the seeds that “young blood” is going to be used to “cure” the diseases that plague mankind, such as Parkinson’s Disease and Alzheimer’s, two neurological diseases that many feel are actually caused by Big Pharma products, such as statin drugs that artificially lower one’s cholesterol for older people.

25% of our body’s cholesterol resides in our brains, so this could very well be another one of those situations where Big Pharma causes the disease to begin with, and then provides the “cure” which is actually no cure at all, but just a lifetime of dependency on more pharmaceutical products. This is their sales model to creating perpetual markets.

Sounds a lot like COVID-19. What could go wrong?

How Big is the Illegal Underground Adrenochrome Market?

As we mentioned last year, the knowledge of the black market adrenochrome drug is now reaching mainstream corporate media outside the U.S., as Turkey, Bulgaria, and other countries began covering it last year.

You can watch the video above from TGRT Haber, part of the Ihlas Media Group in Turkey, with a viewership reportedly that is more than 10 million.

This is a very dark subject, and as we learned from Polish film producer Patryk Vega’s documentary, Eyes of the Devil,  babies are bought and sold not only for sex trafficking, but also for body parts, and that can include the harvest of blood and bone marrow.

Here are some video sources for those who wish to know more, but please be aware that these videos are not for everyone to watch, and certainly not for children, as they are very graphic and disturbing.

ADRENOCHROME The Elite’s Super Drug (Jay Myers Documentaries), is still available on YouTube here. It is also on Bitchute.com if it disappears from YouTube.

There is also a documentary that has been shared on some alternative video platforms since last year, that claims to reveal documents about the underground Adrenochrome production network, including detention centers throughout the U.S. where children are kept in confinement to harvest their blood to make the drug.

There is virtually no way to verify something like this, so look at the evidence yourself and draw your own conclusions. I think this documentary originated with a woman in Germany, and you can watch them here:

There is one thing I am very certain about, however, and that is that the current “crisis” at the border with tens of thousands of children without their parents coming into the country, is not an accident or humanitarian crisis, but part of a very large and lucrative child trafficking network, and I can only speculate as to how long God will allow this to continue without bringing severe judgement against the United States, the #1 destination in the world right now for child trafficking.

We Are Now on Minds.com, MeWe, and Parler. Video channels at Bitchute and Rumble.

If our website is seized and shut down, find us on Minds.com, MeWe, and Parler, as well as Bitchute and Rumble for further instructions about where to find us.

The post “Young Blood” – The Emerging Market for Products Made from the Blood of Children first appeared on Health Impact News.