While very fluid, we can track the latest results of the electronic prediction markets and polling data.

PredictIt currently has a 66% probability for a Biden victory, which is up from a week ago at 62.9% and also higher than four weeks ago, although as usual one has to be aware of just how little capital needs to be deployed to manipulate the illiquid PredictIt market (something every prominent Democratic financier with deep pockets would be well aware of in seeking to manipulate public sentiment in the cheapest possible way). A Trump victory has a roughly 39% probability according to this data, which is up slightly from 37.1% a week ago. The national polls – compiled by Real Clear Politics – suggest a similar tilt in the race with Biden having a 51.3%-43.5% lead against Trump. 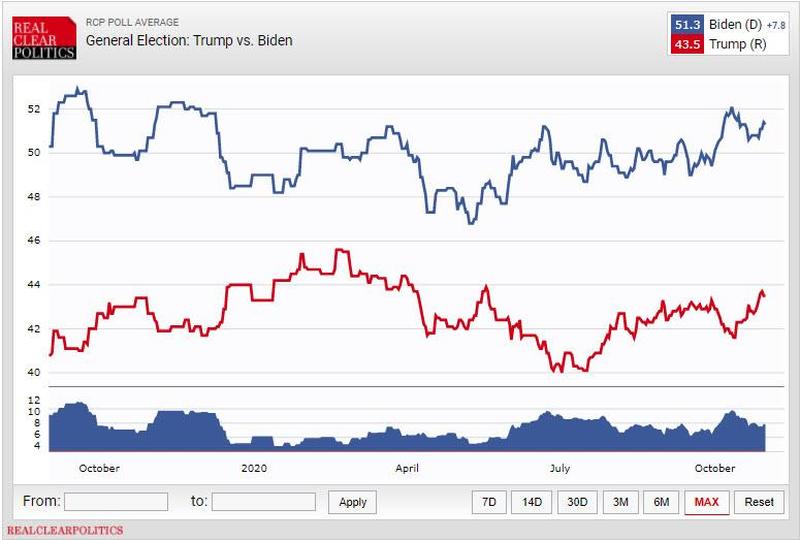 Digging into the state polling in competitive states, Biden currently leads in all the battleground, or “toss up” states except for Ohio, Arizona and Texas. This would give him a comfortable Electoral College (EC) victory of 346-192… 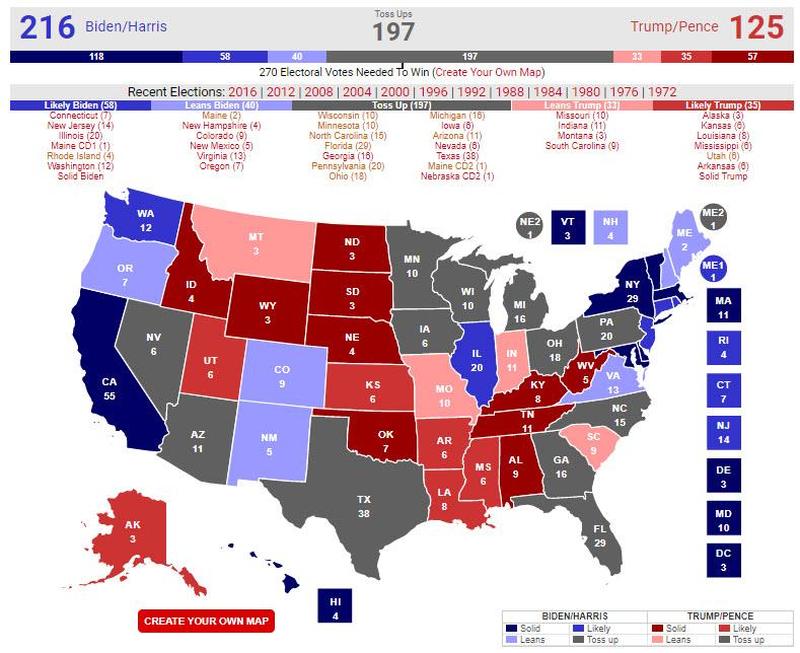 … even though RCP’s average polls of Top Battleground states (FL, PA, MI, WI, NC, AZ), is now just +3.1 in Biden’s favor and down from 5% to weeks ago, with Arizona just flipping to Trump in the past 24 hours. 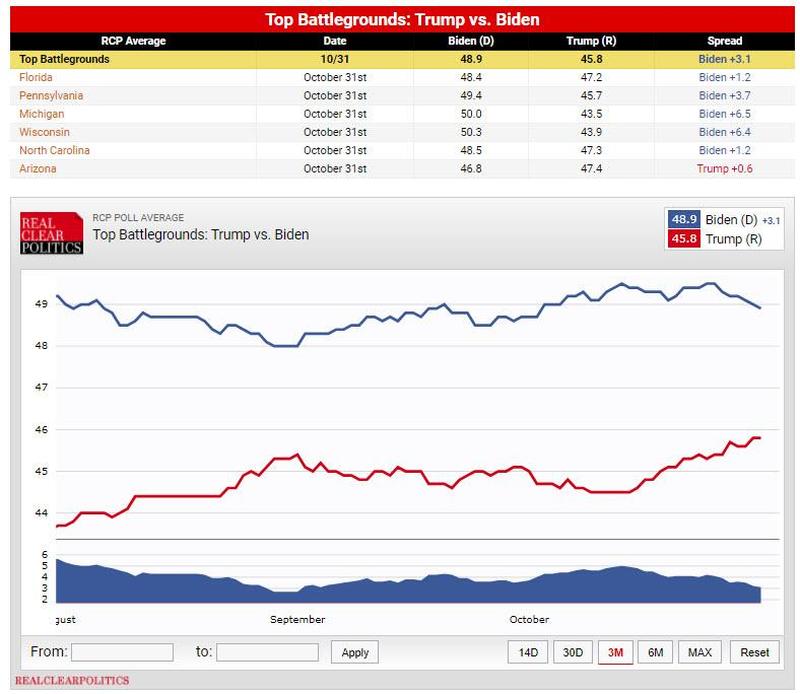 That said, polls are imperfect as 2016 demonstrated – indeed, if we apply the polling miss from 2016 as Bank of America did last week, Florida, North Carolina, Pennsylvania, Georgia, Iowa and Maine would flip. For this exercise we have used the latest RCP polling average data as of Oct 31:

These numbers are then adjusted by applying the same error rates as were observed during the 2016 polling, and the results are shown in the table below:

Still, the margin of victory would be within 0.5 percentage points in Wisconsin (for Biden) and Georgia (for Trump), which would trigger an automatic recount and delay results. In addition, the margin in Pennsylvania and Florida would be less than 1.0%, likely resulting in a bitter post-election night fight and contested outcomes.

In short, no matter what happens on Nov 3, expect recounts and extensive delays before we have a clear winner.

Putting this together, Bloomberg said it best: “All of that means a Trump win on Tuesday would represent a historically staggering failure by public opinion polls, eclipsing even the 2016 miss. While the president’s chances of being re-elected aren’t zero, pollsters say it’s a long shot.”

“If Donald Trump wins, in 2020, anything close to a decisive Electoral College win knowable on election night, that would have repercussions for the research profession that would ripple forever — and deservedly so,” said Jay Leve, chief executive officer of SurveyUSA, a polling firm.

As Bloomberg notes, Level and other pollsters say the election outcomes range from a blowout Biden win to a closely fought contest that could hinge on recounts and court rulings that either candidate could win. They don’t consider a clear, quick and decisive Trump victory among the possibilities.

“It would be astonishing,” Leve said.

The post Here Is The Result If The Polls Are As Wrong In 2020 As They Were In 2016 appeared first on We Are Change.