By now the narrative has gotten so absurdly grotesque and stupid, it’s as if a platoon of monkeys or, worse, woke SNL writers put it on the back of a shampoo bottle.

Today, when we discussed how US consumers have already burned through almost all of their savings from Biden’s fiscal firehose…

… just as the next burst of inflation is about to come and unleash a stagflationary recession or worse, we said that “there is just one event that could short circuit what appears to be a near-certain recession heading into 2022 and mid-term elections which would be devastating for Democrats faced with an imploding economy: another multi-trillion stimulus, just enough to kick the can by another 4-6 months. But for that to happen, the US economy needs to be shut down again which will only happen only once there is enough covid Delta-variant fearmongering. Which should also explain everything that’s happening right now.”

Well, guess what: after the CDC’s legendary flipflop which has steamrolled the credibility of “science”, and concurrent narrative whiplash it has made even the head of ultra-left liberals spin, today the president who earlier needed an aide to tell him he has “something” stuck to his chin, laid out the Delta endgame when he said that the US will, “in all probability,” see more guidelines and restrictions amid rising coronavirus cases…

??? Did Biden just signal another LOCKDOWN???

“IN ALL PROBABILITY” more restrictions are on the way, says Biden ?? pic.twitter.com/ZMbldhJjdJ

… even if actual deaths – you know, the supposed reason why the CDC is so terrified of covid – have not budged. 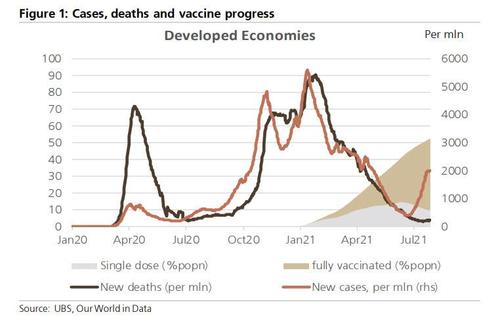 Coming from a president who needs a teleprompter to be reminded what day it is, it wasn’t exactly surprising that Biden refuted the official White House position set just hours earlier on Friday, when White House deputy press secretary Karine Jean-Pierre told reporters, “the way we see this is that we have the tools in our tool belt to fight this, this, this variant,” adding, “we are not going to head towards a lockdown.” She added that “our goal is to make sure that we are not headed towards that — that is not going to be the direction that we take, because we have the tools to prevent that,” Jean-Pierre said, unaware that her boss would make a mockery of her words just minutes later.

The administration’s conflicting comments come as a new study, leaked Friday by the US Centers for Disease Control and Prevention, showed that the variant produces similar amounts of virus in vaccinated and unvaccinated people if they get infected, in effect also making a mockery of the entire previous “get vaccinated and be safe” narrative. But there was no choice: the finding “was a pivotal discovery leading to CDC’s updated mask recommendation,” Dr. Rochelle Walensky, director of the CDC, said Friday.

What she meant is that to have all the narrative pieces that the media needs to persuade America that another lockdown is in its own favor in order to release another $1-2 trillion in stimmies in a time when the admin is openly paying vaccine holdouts hundreds (and soon thousands) of dollars to get a jab, some sacrifices in terms of script continuity had to be made. As for the rest – well, that’s what a propaganda media is for.

Seeking to further demonize the unvaccinated, yet terrified of signing an unconstitutional executive order demanding everyone gets a jab with an experimental vaccine that still hasn’t gotten official FDA approval, the president has instead been urging corporations to do his dirty work for him and demanding that all employees get vaccinated. The wokest of them are already complying.

Biden also announced a number of new steps his administration will take to try to get more Americans vaccinated, including requiring that all federal employees must attest to being vaccinated against Covid-19 or face strict protocols (except for the USPS of course – one can’t piss off that particular labor union or the republicans will be celebrating an avalanche next November). And just to ensure that social animosity and hatred hits a new record, Biden slammed those unvaccinated Americans who believe they should have the final say over what goes into their bodies, be it a Chinese-engineered virus, or an experimental drug meant to enrich Pfizer shareholders: “You present a problem to yourself, to your family and to those with whom you work” Biden said.

And then there were the bribes: like any self-respecting liberal, Biden decided that the best way to incentivize tens of millions is to just give them free money, and this week the administration called on states, territories and local governments to do more to incentivize vaccination, including offering $100 to Americans for getting vaccinated, paid for with American Rescue Plan funding. Of course, since not everyone is an idiot, the unvaccinated now have an even greater reason to hold out, waiting for the bribe to grow to $200, $400, $800 and so on. Which in a country where printing and handing out money is the only business model left, may well be the real motive.

The administration chickened out short of pursuing a vaccination requirement for the entire country, however. Biden said Thursday that he didn’t know yet whether the federal government had the power to require vaccines, and White House Covid-19 Response Coordinator Jeff Zients told CNN’s Wolf Blitzer that the administration is not considering a nationwide requirement.

“That’s not an authority that we’re exploring at all,” Zients said; so instead of doing what Biden believes in – or at least pretends to – he will pass the potato and force corporations to do Biden’s dirty work for him and fire all those who refuse to get jabbed. At least they have many more years of stimmies to look forward to: after all, we are only on the Delta variant – by the time we get to Omega, the Fed will be printing a few hundred quadrillion every day…

The post Countdown to the Next Lockdown: Biden Says What Nobody Wants to Hear appeared first on We Are Change.