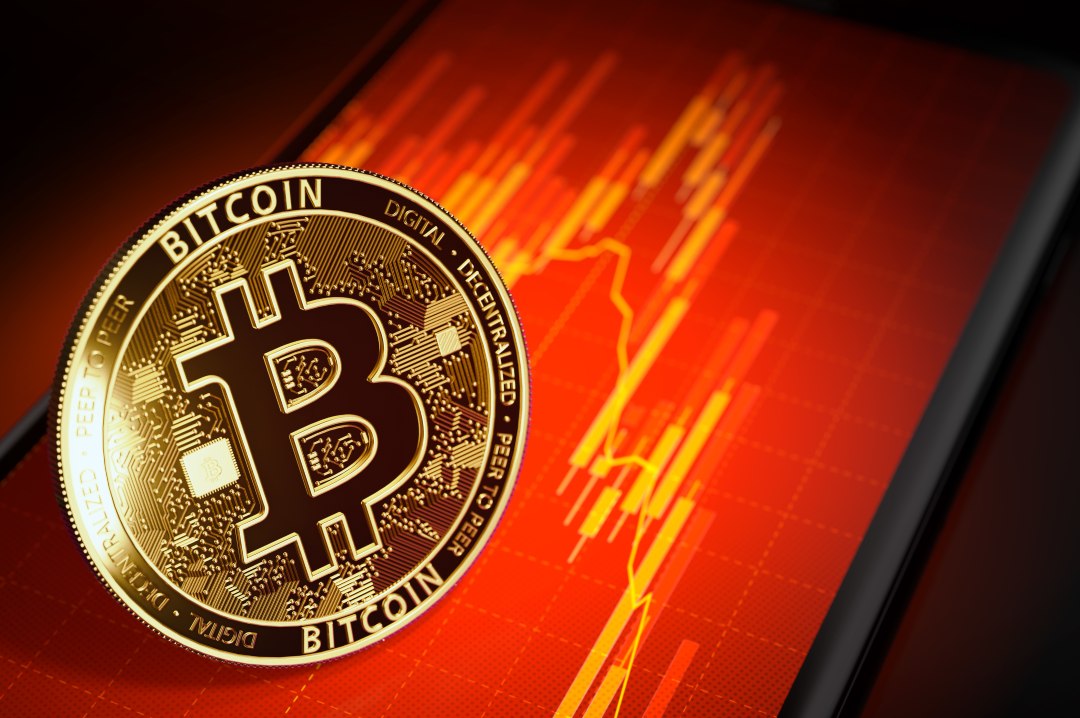 Bitcoin price dropped from $13,750 to $13,200, posting a 4% pullback in hours. The sudden price drop of Bitcoin was unexpected because of the funding rate of the futures market. The Bitcoin futures market implements a mechanism called “funding” to ensure balance in the market. At press time, BTC is trading around $ 13.596, decreased slightly by nearly 2% in the last 24 hours but still achieved a gain of nearly 4% in the last 7 days.

As AZCoin News reported, due to the funding system when most of the market is selling or short selling Bitcoin, short-sellers have to encourage long-term holders or buyers. This also happens to buyers when the market is flooded with long holders. When the funding rate is negative, the short-term holder needs to pay fees to either the long holder or a buyer to maintain their positions. Since this means there is more incentive to buy BTC and bet on its price going up, it usually causes BTC to go up. When Bitcoin falls dramatically, its funding rate on major exchanges is negative. As a result, the drop has surprised many traders, increasing its negative impact on Ethereum.

Bitcoin has been consolidating for the past week, with buyers and sellers both hitting a standstill as cryptocurrencies trade in the $ 13,000 zone. Last week, its price climbed as high as $ 14,100 before losing momentum and dropping to $ 13,000. It has bounced back and is currently climbing to the $ 13,800 resistance.

This price action is unlikely to change until after the election, and most traders are starting to take some side in anticipation of strong volatility next week. For this next volatility in favor of the bulls, Bitcoin must break resistance levels between $ 13,800 and $ 14,000.

One trend that will likely help drive the next movement and contribute to increased volatility is the increasing use of leverage by traders on margin platforms.

CryptoQuant talked about this in a recent post, explaining that traders are actively using leverage to bet on a clearly oriented movement from Bitcoin as elections close:

“The BTC estimated leverage ratio on derivative exchanges is increasing ahead of the [2020 elections]… It might cause high volatility on BTC price due to cascade liquidations.” 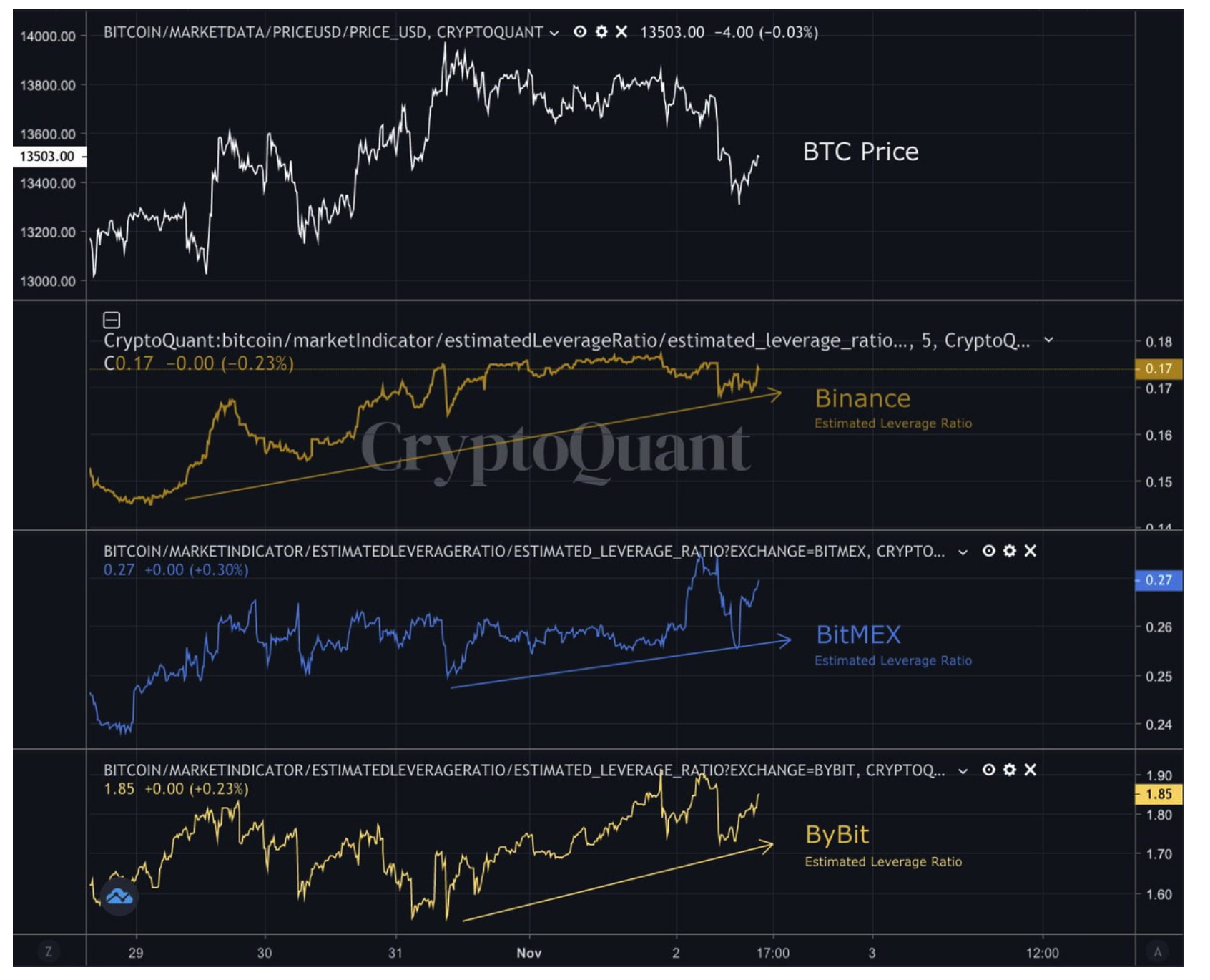 Santiment explained that one key technical indicator is flashing signs that the cryptocurrency’s rally has been overextended. They note that this, coupled with a high average profit amongst investors, indicates that further inflows of selling pressure are imminent.

“The new MVRV Divergence Model from [Santiment] indicates that Bitcoin is in overbought territory, according to profits by average traders over various timeframes. Particularly in the past 6-month time range, average BTC traders are +114.7% in profit.” 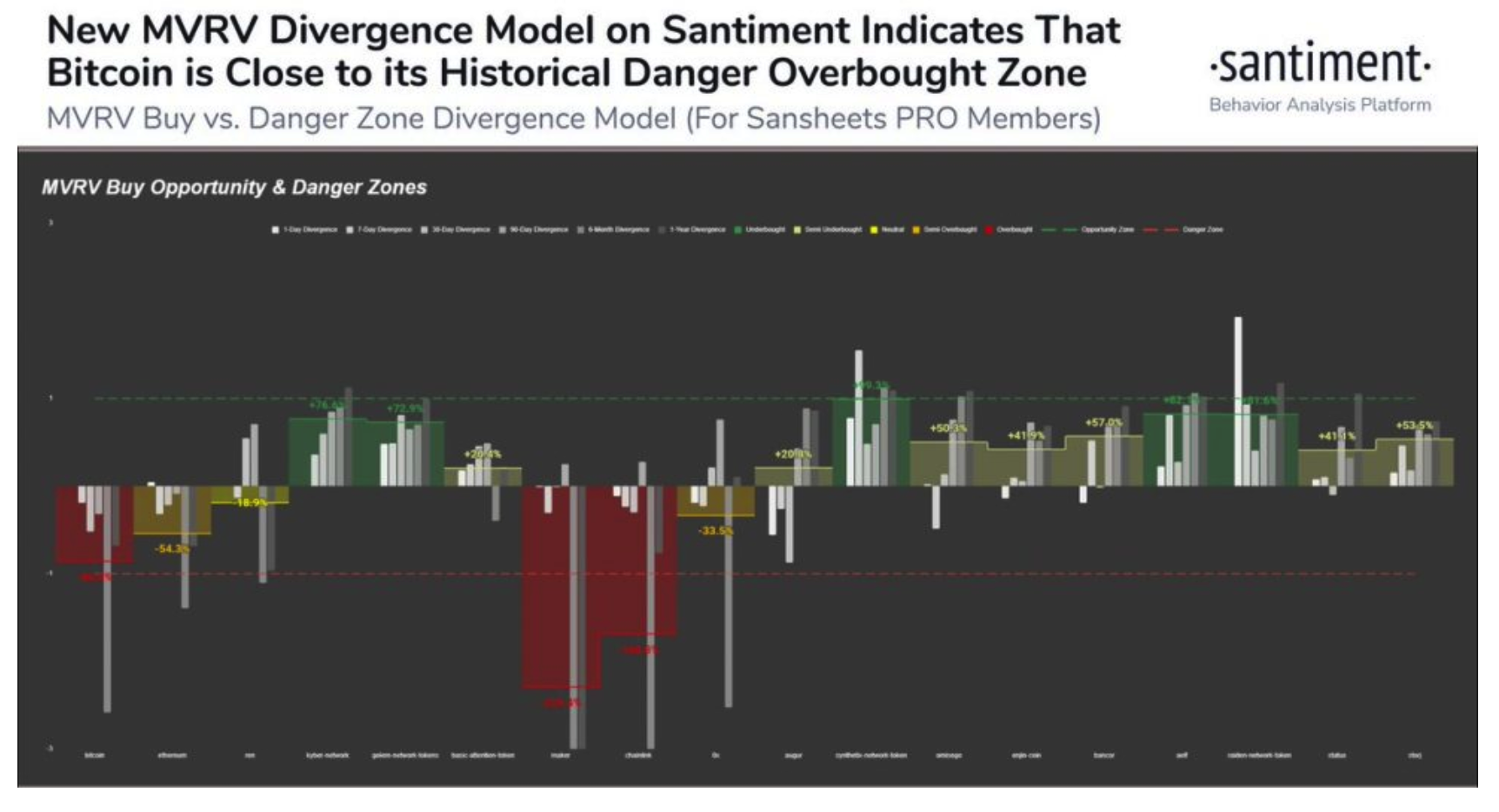 Where Bitcoin trends next will likely depend largely on whether these highly profitable investors begin taking money off the table.

“BTCUSD is currently struggling to break the $14,000 mark. On the surface, this might seem like a usual pullback from a psychological level. Still, historically a break of the final resistance before the all-time high generally leads to the start of a more aggressive bull market.”

“$14k was certainly rejected, but that is hardly a surprise, nor bad news for BTC going forward. The fact that BTC broke through $14k after so long and that the drop thereafter was only about 7% is actually a real show of strength.”

“If $13k holds, particularly in an atmosphere with so much uncertainty because of the US election and its aftermath, it seems clear that $14k will fall (on the way up) over the short term and that the ATH (all-time high) will not be far behind.”

The post Bitcoin price has been trading in “overbought” territory for a few days now as the buyer has a profit of 115% appeared first on AZCoin News.