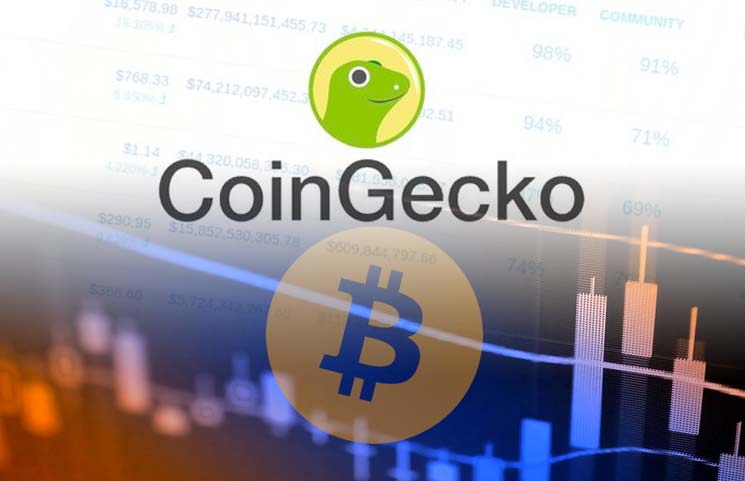 As always, CoinGecko just released the October Report. In their analysis of the market, it can be said that Bitcoin price has had a pretty good month, starting to rise sharply right after the ETH craze caused by the boom. DeFi started to cool down. Additionally, October saw many institutions like PayPal, Square, and DBS Bank to adopt cryptocurrencies. The news of its adoption has certainly helped fuel a positive sentiment towards Bitcoin.

1/ October was one heck of a month for crypto! That is why we are here to provide our October 2020 Monthly Crypto Report!

You can read the full report here: https://t.co/Xw4BcmsLIB

We summed up the spiciest data for you, so keep on reading for a sneak peek!

First, let’s get to the price. Bitcoin price has risen 28% and hit a multi-year high of $ 13,778. However, this figure is nothing compared to the $ 15,074 at press time. News of major institutions like MicroStrategy, PayPal, Square, and DBS Bank taking steps to adopt cryptocurrencies has helped fuel a positive sentiment towards Bitcoin. 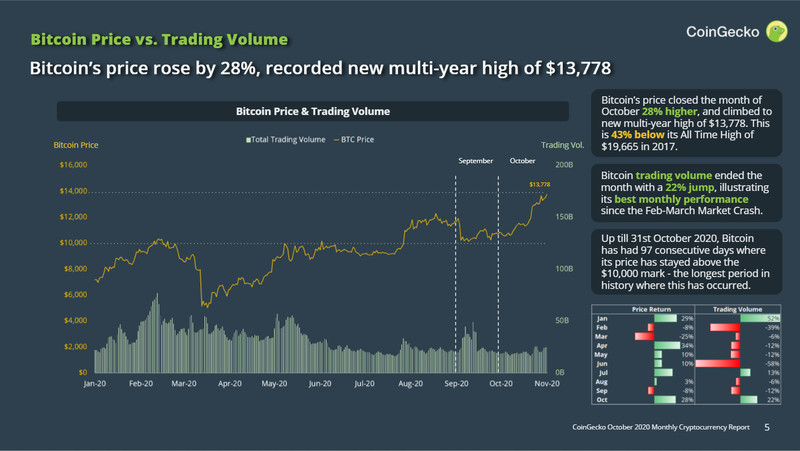 More evidence of Bitcoin’s growth can be found in its trading volume, which ended the month with a 22% gain. This is its best monthly performance since the market crash from February to March 2020.

Also, the open interest rate for perpetual swaps has risen 40% since the start of September, showing an upbeat sentiment towards Bitcoin. Aggregation of open interest Bitcoin perpetual swaps has risen by $ 87 million (+ 5%) this month and crossed the $ 2 billion mark again. Of which, Binance accounts for the majority of the Open Rate at $ 738 million with Bybit followed by $ 563 million.

Overall, the Open Interest in Bitcoin Perpetual has increased by almost 40% since the biggest daily drop on September 7th, Bitcoin price increases. 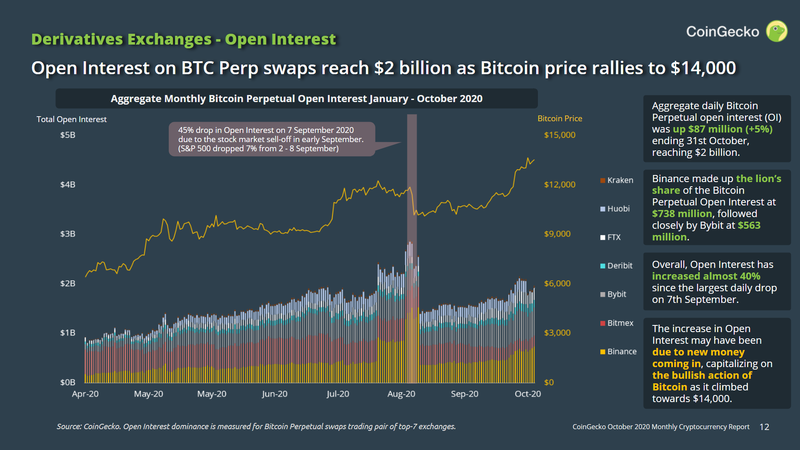 Despite a slight drop in September, total crypto market capitalization continued to grow 19% in October. This resulted in another annual high of $ 378 billion. It also saw a slight 7% rebound in trading volume, bringing it back to August’s average trading volume. This could also be due to a rise in interest from large institutions adopt and implement Bitcoin into their business strategies. 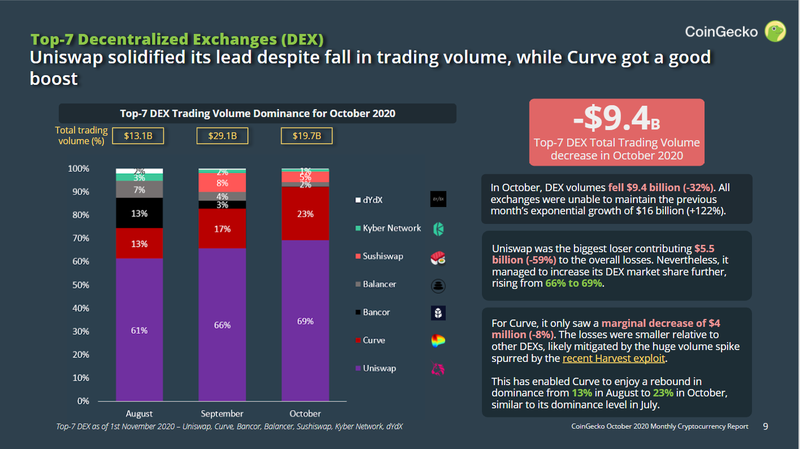 DEX volume for October fell by $ 9.4 billion (-32%) across all exchanges. Uniswap suffered the heaviest consequences, with the largest loss of $ 5.5 billion (-59%). However, despite the decline, Uniswap continued to maintain its position as the most popular DEX. The protocol strengthens its market dominance by increasing its market share from 66% to 69% in October.

The post CoinGecko report: Bitcoin price has had quite a bullish run this month due to a variety of factors such as the U.S elections appeared first on AZCoin News.