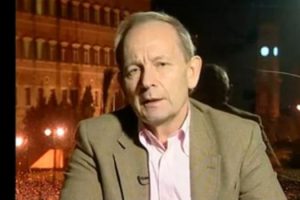 VLA COMMENT: Well written…a political and literary read worth while for the intelligent.

What is a ‘digital Iron Curtain’? It is when Big Digital, as Professor Michael Rectenwald terms these western Tech Goliaths, become ‘governmentalities’, using a word originally coined by Michel Foucault to refer to the means by which the ‘governed’ (i.e. ‘we the people’) assimilate, and reflect outwardly, a mental attitude desired by the élites: “One might point to masking and social distancing as instances of what Foucault meant by his notion of governmentality”

And what is that desired ‘mentality’? It is to embrace the transfiguration of American and European identity and way-of-life. The presumptive U.S. President Elect, the European élites, and top ‘woke’ élites moreover, are publicly committed to such “transformation”: “Now we take Georgia, then we change the world,” (Chuck Schumer, Senate Minority Leader, declared, celebrating Joe Biden’s ‘victory’); “Trump’s defeat can be the beginning of the end of the triumph of far-right populisms also in Europe”, claimed Donald Tusk, former president of the European Council.

In short, the ‘Iron Curtain’ descends when supposedly private enterprises (Big Digital) mutually inter-penetrate with – and then claim – the State: No longer the non-believer facing this coming metamorphosis is to be persuaded – he can be compelled. Regressive values held on identity, race and gender quickly slipped into a ‘heresy’ labelling. And as the BLM activists endlessly repeat: “Silence is no option: Silence is complicity”.